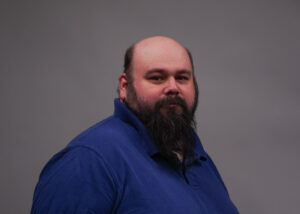 Joel C Croyle attended Lakeland Community College and Cleveland State University, where he received an Associates of Arts degree in music history and music theory and a Bachelor’s degree in communications.  He has performed as a drummer professionally since the age of 15 all over the world with various groups.  As a youth performer he played with such groups as “American Music Abroad”, “The singing Angels” and “The Lakewood Roadshow” and as an adult has played in several groups such as “The Brass Knuckles Brass Band” (Traditional),  “Patchwork Monkey” (Blues) and “Amorphous Mold” (Rock).

He has been teaching drums and percussion privately for over 20 years. Joel likes to focus on the interests of his students and teach in different musical styles such as classical, jazz, rock and metal.  He can prepare someone for school band or take an advanced student to another level preparing for a career in the music business. Other than snare and drum-set Joel can teach latin and African instruments, marimba, bells and various other percussion. His lessons will range from learning fundamentals such as sticking techniques and rudiments, to advanced techniques such as single and double bass drumming, odd-time, and groove passed patterns.

Many of his recordings can be found at: