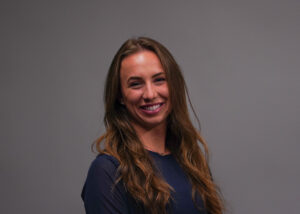 Renae Frank is a December 2021 graduate from Northern Illinois University where she received a BFA in Dance as well as a BS in Psychology. Renae is originally from DePere, Wisconsin.

Prior to attending college, she was a competition dancer for ten years at All That Dance, Inc. Renae also trained at Skorzewski School of Ballet in Green Bay, WI, from 2014 until 2017. Renae previously attended numerous summer dance intensives at the Ruth Page Center for the Arts in Chicago.

While at Northern Illinois University, Renae trained five days a week in many styles of dance including ballet, modern, pointe, Pilates, tap, and jazz. Aside from dance, Renae is passionate about psychology and brain health. She aims to one day return to school to get a master’s in Dance/Movement Therapy.
Renae moved to Madison, Wisconsin in June of 2022 as a new member of Madison Contemporary Dance. Aside from teaching at SCA and dancing with MCD this season, Renae is also a youth fitness instructor and employee at Harbor Athletic Club in Middleton, WI.
Page load link
Go to Top